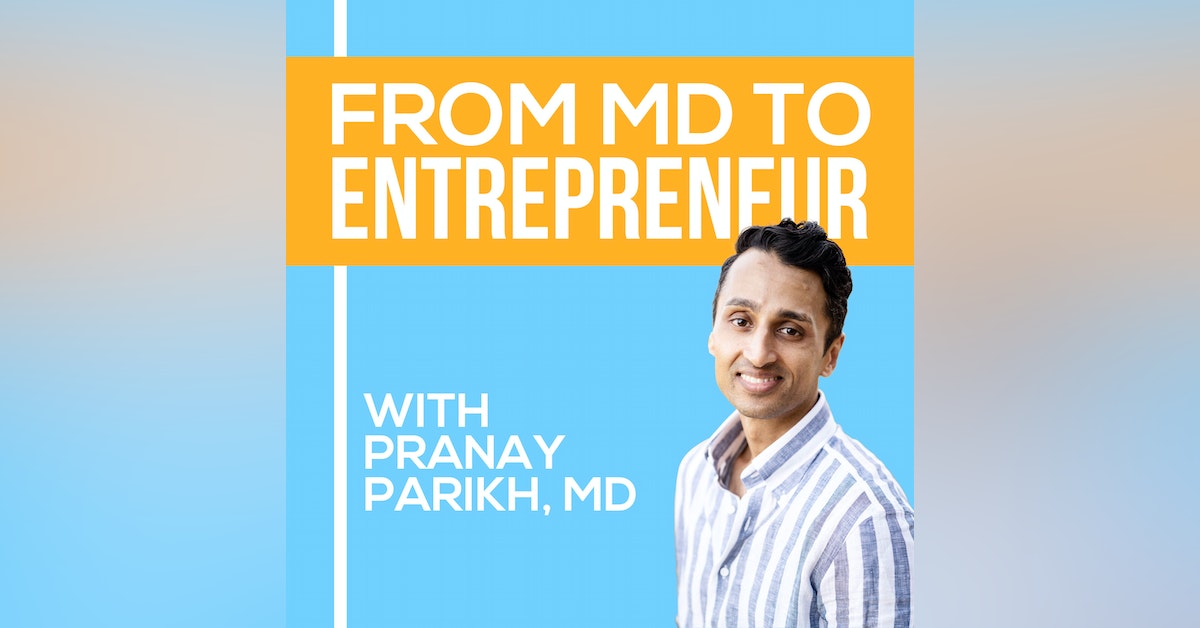 You have been added to our list! We will keep you updated on our new episodes.

E02 - My Journey From MD to Entrepreneur

Listen to my journey From MD to Entrepreneur.

From MD to Entrepreneur Website
Email me
Pranay Parikh Linkedin

Thank you for listening to FROM MD To Entrepreneur Podcast
Tune in every Wednesday, 5 AM PST.

[00:00]  Hi, and welcome to the, from MD to entrepreneur podcast, the podcast that teaches you how to find financial security outside of medicine. I'm Dr. Pranay Parikh And I started out as a fresh attending with several business knowledge, despite loving my job and medicine. I didn't feel like I had to financial security or control over my life.

[00:26] Today, I am a serial entrepreneur and practice medicine on my own terms. Listen on to learn how I've helped hundreds to do the same.

[00:35] Have you ever had something that's been on your to-do list, but something kept coming up and you never got to it. You realize that days or even months went by and it's still there on your list. Maybe you put a sticky on your computer screen or even made it your new year's resolution. Take a second to think.

[00:53] Is there anything coming up? Well starting this podcast is like that. For me, I've been wanting to do it for years. I'd watched a few courses and bought everything I needed to start and well, just didn't it took a year and a half before I started when it could have been just a short weeks. I know because I helped a ton of people start their own podcast.

[01:13] I always had a twinge of embarrassment when people would ask me about mine. I was busy, I'd say, and I was, but aren't we. It wasn't because I was too busy. I finished plenty of other projects in the meantime, even found some time to bend some shows. Every time I started to work on my podcast, I would feel some resistance friction.

[01:32] I'd be about to start working on it and think to myself, I should just check my email really quick or read the news or go bug my wife. There was less resistance doing those things. By the time I was done there wouldn't be much time left in the day. And I'd promise myself that had worked on it. And a year and a half went by.

[01:52] You might think maybe I'm just not that into podcasts or starting one. But those that know me know that I love podcasts. I listen to somewhere between 20 to 30 hours a week, the phrase that just heard this on a podcast comes out of my mouth. At least once a day, I've been looking forward to joining the ranks of podcast creators, but the resistance kept.

[02:13] One day. I finally put my finger on what the resistance was. It was fear. I was scared to start this podcast to put it out in the world where it could be judged. I already had a perfect little place for it in my head, a podcast that helped make an impact on doctors' lives by giving them the inspiration and tools to become an entrepreneur.

[02:32] I already had a roadmap figured out it was perfect. But by putting words on a computer screen, I was giving form to something I can tell you that it was far from perfect. It was amateur and disappointing. However, I'm reminded by a quote from Anne Lamont, author of bird by bird in her book, she talks about getting your bad first draft done as quickly as possible.

[02:53] She says that all good writers write them, barely anyone, but the author ever sees them after you've done your first one. You're one step closer to a good second draft and a terrific third. I promise you that I need way more than three drafts, but you get the idea. I wish I could tell you that was it.

[03:10] That one win over fear is all that it takes. Unfortunately, the fear doesn't stop. Once you put pen to paper or words to a screen, it continues to fight you all along the way. It gets you to write 10 drafts. When three would have sufficed it, has you chasing perfection or never publishing at all? It has you been embarrassed to talk about you

[03:30] Hiding it from anyone, you know, because it's safer that way as you thinking that no one wants to hear you and to move on or more, diabolically it tells you that there are plenty of emails to answer or books to read. You don't have time to work on anything outside of your main job. We then get sucked into a productivity treadmill, getting a lot done without really getting anything done.

[03:51] Hope is not lost. I was eventually able to get this podcast out. And I'm internally grateful that you were taking the time to listen to it. One technique that helped me beat back. This fear was something I learned from Jerry Seinfeld. He was talking to a young comic by writing jokes. He said that when he starts writing jokes, he treats his work as a baby.

[04:10] They could do no wrong. Just the simple fact of them existing was a miracle in itself. That's because he knows how hard it is to create. Almost immediately. We are unhappy with our creation. That happiness just gets in the way I have to be honest. So it's difficult for me to be gentle with myself. This is something that I've been trying to get better at.

[04:30] So instead I imagine that I'm looking at someone else's work. How would I react if I was watching a friend record a podcast or write a blog article, I be giving them a ton of encouragement and respect for the simple act of starting Seinfield. Next goes into editor. He becomes a harshest critic that he can be removes all the fluff edits and shaves it down to just the best of the best.

[04:53] That's what he eventually takes to the stage. He often leaves more on the table than what he actually kept. That's what's made him the success. He is the separation between the creator and editor has also served me. Well, it's hard to do both at the same time. And often you feel like you aren't making much progress.

[05:09] We all know there's a cognitive cost to switching from task to task. But there's also one from switching between these two modes, pick one and dedicate some time to it before switching over. That's it for this episode, I hope you'll be able to tackle whatever it is that you've been procrastinating on and beat back fear on your journey of entrepreneurs.

[05:27] In future podcasts. We'll talk about more tools that you can use as battling fear is a daily battle. Thanks everyone. Talk to you soon. Thank you for listening to this episode. If you have any questions or would like to follow me, please sign up for my newsletter at frommd.com

You have been added to our list! We will keep you updated on our new episodes.

Email has been submitted.